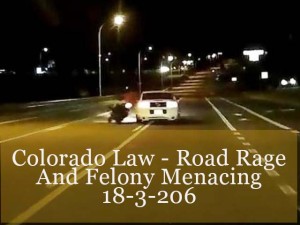 Colorado Law – Road Rage And Felony Menacing 18-3-206 – The potential for being charged with the crime of felony menacing in Colorado in a so called road rage incident – is great. Colorado is an “open carry” state and it is common for the people of Colorado to have weapons in their automobiles. Road rage makes it more likely – in one of these incidents – one or even both parties may use their weapons.

While I have written on this subject before in other contexts such as menacing in Colorado domestic violence cases, this article takes a closer look at the legal issues surrounding felony menacing on the road.

All Crimes Are Broken Down Into Their Constituent Elements

What separates Felony Menacing in Colorado from Misdemeanor Menacing is understanding those elements.

(1) A person commits the crime of menacing if, by any threat or physical action, he or she knowingly places or attempts to place another person in fear of imminent serious bodily injury.

(a) By the use of a deadly weapon or any article used or fashioned in a manner to cause a person to reasonably believe that the article is a deadly weapon; or

(b) By the person representing verbally or otherwise that he or she is armed with a deadly weapon.

Menacing is a class 3 misdemeanor, but, it is a class 5 felony if committed:

The Elements of Colorado Felony Menacing are:

2. in the State of Colorado, at or about the date and place charged,

3. by threat or physical action,

4. knowingly placed or attempted to place another person in fear of imminent serious bodily injury,

5. [by the use of a deadly weapon, or any article used or fashioned in a manner to cause a person to reasonably believe that article is a deadly weapon.] -or-

[by representing verbally or otherwise that he or she is armed with a deadly weapon.]

When an experienced Colorado criminal defense lawyer begins analyzing a case – he or she starts with the elements of the charge and begins to ask important questions:

First: Was a deadly weapon used?

For purposes of Colorado’s Felony Menacing Law a deadly weapon is a weapon that is capable of causing serious bodily injury. Colorado District Attorneys can be extraordinarily creative in alleging the use of a deadly weapon – hands, pens, chairs, an the like.

Third: Did the Defendant “knowingly” place, or attempt to place someone in fear of imminent serious bodily injury?

Here there are two key issues – (1) Did the Defendant actually KNOW they had placed another in fear of serious bodily injury AND if it is proven they did have that knowledge, was that effort or attempt an imminent threat – meaning it was a clear and present threat in the moment?

A threat is defined as a statement of purpose or intent to cause injury or harm to the person, property, or rights of another, by the commission of an unlawful act.

Colorado law makes no distinction between a conditional and unconditional threat. Even a threat that has a contingency – such as IF you approach me – I will shoot you – as long as the contingency itself remains in control of the person making the threat, it is sufficient under Colorado law.

A statement of purpose or intent to shoot another person conditioned on the other person making some move against the maker of the threat satisfies the “threat” element of the statutory definition of felony menacing in section 18-3-206.

Fifth: Was the act that actually constituted the crime – performed as an act of self defense?

Felony menacing in Colorado does not necessarily require that the “use” of the deadly weapon include  the pointing of the weapon directly at the victim. The element of “use” is satisfied when the weapon is displayed in manner that causes victim to believe that it will be used against him in case of resistance.

In the case of an alleged road rage incident, the Defendant’s acts of opening a bag and displaying a handgun or showing a weapon to another while pointing it up in the air, or – if during the incident, placing or keeping a hand on gun, constituted “use” of deadly weapon – all meet the laws requirements.

If there is a road rage altercation and during that altercation the Defendant, while making the threat, uses a firearm in the presence of the alleged victim in a manner that would cause that fear for that victim’s safety – the Defendant most likely would be charged with knowingly placing or attempted to place that victim in fear of imminent serious bodily injury by means of a deadly weapon.

Under Colorado Law – a person who commits the crime of felony menacing where the intended victim is a police officer or firefighter – has committed a very serious felony with a minimum mandatory sentence to prison of ten years.

Here is the law:

A person commits Assault in the First Degree if:

Never stop fighting – never stop believing in yourself and your right to due process of law. You will not be alone in court, H. Michael at your side every step of the way – advocating for justice and the best possible result in your case.

ABOUT THE AUTHOR: H. Michael Steinberg – Email The Author at hmsteinberg@hotmail.com – A Denver Colorado Criminal Defense Lawyer – or call his office at 303-627-7777 during business hours – or call his cell if you cannot wait and need his immediate assistance – 720-220-2277. Attorney H. Michael Steinberg is passionate about criminal defense. His extensive knowledge and experience of Colorado Criminal Law gives him the edge you need to properly handle your case. 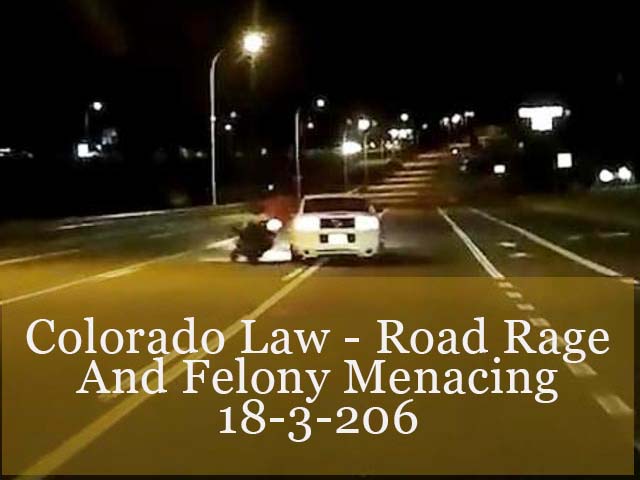 Article Name
Colorado Law - Road Rage And Felony Menacing 18-3-206
Description
The potential for being charged with the crime of felony menacing in Colorado in a so called road rage incident - is great. Colorado is an "open carry" state and it is common for the people of Colorado to have weapons in their automobiles. Road rage makes it more likely - in one of these incidents - one or even both parties may use their weapons.
Author
H. Michael Steinberg