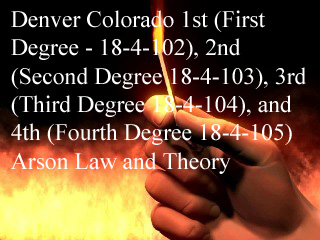 Denver Colorado 1st (First), 2nd (Second), 3rd (Third), 4th (Fourth) Degree Arson Criminal Defense Lawyer Explains Arson Law and Defenses – In Colorado – arson can be a very serious crime and is one of the most serious crimes in the property crimes category.

Because arson cases are complex – many police departments and private insurance companies spend many thousands of dollars proving them. Defending these cases must be aggressive as they tend to turn – not on direct evidence such as eyewitness testimony – but on circumstantial evidence – much of it scientific.

Fire experts in these cases often make the difference between a successful defense based upon reasonable doubt and a conviction followed by a lengthy jail sentence. Experts determine whether accelerants were used to start enhance the fire and to determine the source of the fire.

Private retained investigators can also be used to bridge the gaps in the investigations conducted by the state of Colorado. Which witnesses were interviewed – which were not – and why. Investigators determine what, if any motives existed to set the fire – are there alternate suspects in the case if arson is proven – as well as pursuing many other leads normally generated in these cases are followed up.

It is BECAUSE the evidence in fire cases is usually circumstantial that a creative and thorough knowledge of the law in arson defense is critical.

Some Of The Most Common Arson Cases:

Experts can testify that a suspect could not have set the fire (alibi) or that the fire was accidental (accident – not intentional). If a fire is the result of an accident – it is not a crime – it is negligence and you can’t be convicted of this charge. A clothing iron left on – candles carelessly set a fire, a defective space heater, a gas leak, a cigarette carelessly left on a couch or other piece of furniture.

If Intent Is Established – How Do I Fight a Colorado Arson Charge?

Some common defenses to Arson include:

There is insufficient evidence…

Arson cases usually involve few if any eye – witnesses and the “fire-starting devices” are often completely destroyed in the fire itself. There must exist evidence that can prove you guilty beyond a reasonable doubt – something that directly ties you to the fire before a jury will find you guilty.

Others may have committed the crime and you are mistakenly targeted from the start with setting the fire. Falsely accusing you of arson or reckless burning may happen because another accidentally started the fire and was afraid to suffer the consequences or they intentionally started the fire and are pointing at you to cover up their own involvement.

Mistaken identification occurs mush more often than you might believe. See my article by following this LINK

Perhaps someone identified you because that fit the description of the arsonist. A car just like yours was seen leaving the scene, since it is your property some of your belongings were found in the fire… All of these possibilities can explain why you were unfairly targeted.

The Types Of Arson In Colorado

There are many types of Felony and Misdemeanor Arson in Colorado – they are:

1. A person who knowingly sets fire to, burns, causes to be burned, or by the use of any explosive damages or destroys, or causes to be damaged or destroyed, any building or occupied structure of another without his consent commits first degree arson.

3. A defendant convicted of committing first degree arson by the use of any explosive shall be sentenced by the court in accordance with the provisions of section 18-1.3-406.

1. A person who knowingly sets fire to, burns, causes to be burned, or by the use of any explosive damages or destroys, or causes to be damaged or destroyed, any property of another without his consent, other than a building or occupied structure, commits second degree arson.

2. Second degree arson is a class 4 felony, if the damage is one hundred dollars or more.

3. Second degree arson is a class 2 misdemeanor, if the damage is less than one hundred dollars.

1. A person who, by means of fire or explosives, intentionally damages any property with intent to defraud commits third degree arson.

2. Fourth degree arson is a class 4 felony if a person is thus endangered.

3. Fourth degree arson is a class 2 misdemeanor if only property is thus endangered and the value of the property is one hundred dollars or more.

4. Fourth degree arson is a class 3 misdemeanor if only property is thus endangered and the value of the property is less than one hundred dollars

If people are home during an attempted arson and are at a substantial risk of serious bodily injury or death, the DA may add attempted murder charges which would mean facing a mandatory prison sentence.

The importance of knowing how to cross-examine the prosecution’s expert witnesses and to effectively challenge the circumstantial and direct evidence in an Arson case is critical.

Can they actually prove that you (1) intentionally (or even recklessly) set a fire, or (2) that you were even responsible for the incident.

The fire investigators assigned to investigate a fire are almost always the expert witnesses who testify. An experienced Colorado Arson Defense Lawyer will obtain – not only all of the files of these investigators – but all of the insurance company and fire chiefs files – looking for any and all exculpatory evidence (evidence of innocence).

The experts base their testimony at trial most often on “experience and training” and not necessarily accepted science and scientific protocol.

The scientific standards laid our in the National Fire Protection Association (NFPA) “NFPA 921 Guide for Fire and Explosion Investigations” is the standard against which all suspicious fire investigations are measured.

Known as NFPA 921, it establishes an OBJECTIVE scientific approach and methodology for

conducting an investigation of a fire scene. The kind of unproven “rules of thumb” used by fire investigators should have been replaced by a scientific procedure for the investigation from start to finish. It should be the first tool used by a Colorado criminal defense lawyer in the all important cross examination of the fire investigator(s) at trial.

Some Sample Areas Of Cross Examination Arise Out Of NEPA 921

The Bifurcation Of Analysis At Trial

An arson trial should logically be bifurcated into 2 stages – this should be the order of inquiry:

First – Was this fire incendiary and, if so,

Second – Did this defendant set it intentionally.

A weak evidentiary case should not be “bolstered” by evidence of motive. Weak causation evidence should not be used to fool a jury into overlooking hard scientific evidence! If the incendiary stage fails – the case should end with a motion for judgment of acquittal.

ABOUT THE AUTHOR: H. Michael Steinberg – Email The Author – A Denver Colorado Arson Crimes Criminal Defense Lawyer – or call his office at 303-627-7777 during business hours – or call his cell if you cannot wait and need his immediate assistance – 720-220-2277.

If you are charged with A Colorado crime or you have questions about the topic of this article Denver Colorado 1st (First Degree – 18-4-102), 2nd (Second Degree 18-4-103), 3rd (Third Degree 18-4-104), and 4th (Fourth Degree 18-4-105) Arson Law and Theory, please call our office. The Law Offices of H. Michael Steinberg, in Denver, Colorado, provide criminal defense clients with effective, efficient, intelligent and strong legal advocacy. We can educate you and help you navigate the stressful and complex legal process related to your criminal defense issue.

H. Michael Steinberg, is a Denver, Colorado criminal defense lawyer with over 30 years of day to day courtroom experience – specializing in Colorado Criminal Law along the Front Range. He will provide you with a free initial case consultation to evaluate your legal issues and to answer your questions with an honest assessment of your options. Remember, it costs NOTHING to discuss your case. Call now for an immediate free phone consultation.

Helping Clients To Make Informed Decisions In the Defense of Colorado Criminal Cases.

Contact A Lawyer with Three Decades of Experience as a Denver Criminal Attorney at The Steinberg Colorado Criminal Defense Law Firm today.