Joy Riding In Colorado Is A Felony 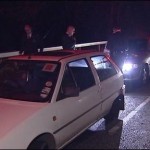 Joy riding in Colorado – known as Aggravated Motor Vehicle Theft in the Second Degree § 18-4-409 – is a low grade felony.  For many years it was only a misdemeanor – then several years ago – the State of Colorado increased the penalty to a felony based on the value of the car taken – even if it is taken for a very short period of time.

While Joyriding is a crime defined as the act of operating another person’s vehicle, including a car, boat, or motorcycle, without permission from the owner, the crime used to differ from the more serious offense of auto theft because the perpetrator of the crime of joyriding does not intend on taking the vehicle permanently.

Today – as described below -Colorado no longer makes that distinction.

To understand the crime of Joyriding – as with all other complex crimes in Colorado – you must first analyze and fully study the degrees of Aggravated Motor Vehicle Theft in Colorado:

Here is the law with analysis inserted in brackets:

(2) A person commits AGGRAVATED MOTOR VEHICLE THEFT IN THE FIRST DEGREE if he or she knowingly obtains or exercises control over the motor vehicle of another without authorization or by threat or deception and:

(a) Retains possession or control of the motor vehicle for more than twenty-four hours; or

(b) Attempts to alter or disguise or alters or disguises the appearance of the motor vehicle; or

(c) Attempts to alter or remove or alters or removes the vehicle identification number; or

(d) Uses the motor vehicle in the commission of a crime other than a traffic offense; or

(f) Causes bodily injury to another person while he or she is in the exercise of control of the motor vehicle; or

(g) Removes the motor vehicle from this state for a period of time in excess of twelve hours; or

(3) Aggravated motor vehicle theft in the first degree is a:

(a) Class 4 felony if the value of the motor vehicle or motor vehicles involved is twenty thousand dollars or less;

(b) Class 3 felony if the value of the motor vehicle or motor vehicles involved is more than twenty thousand dollars or if the defendant has twice previously been convicted or adjudicated of charges separately brought and tried either in this state or elsewhere of an offense involving theft of a motor vehicle under the laws of this state, any other state, the United States, or any territory subject to the jurisdiction of the United States.

(4) A person commits AGGRAVATED MOTOR VEHICLE THEFT IN THE SECOND DEGREE if he or she knowingly obtains or exercises control over the motor vehicle of another without authorization or by threat or deception and if none of the aggravating factors in subsection (2) of this section are present.

Aggravated motor vehicle theft in the second degree is a:

(a) Class 5 felony if the value of the motor vehicle or motor vehicles involved is twenty thousand dollars or more;

(c) Class 1 misdemeanor if the value of the motor vehicle or motor vehicles involved is less than one thousand dollars.

(4.5) Whenever a person is convicted of, pleads guilty or nolo contendere to, receives a deferred judgment or sentence for, or is adjudicated a juvenile delinquent for, a violation of this section, the offender’s driver’s license shall be revoked as provided in section  42-2-125, C.R.S.

The Punishments For Joyriding

As noted above – the possible punishments for Joy Riding are linked to the value of the vehicle taken. What is most likely for an adult with little or no criminal history – the sentence would involve probation – with a possible jail sentence as a condition of probation of up to ninety (90) days, or up to a two (2) year work release sentence as a condition of probation. Sentences to the Department of Corrections are exceedingly rare for this crime and are found in the LINK provided above.

As with many other Colorado crimes – the crime of joyriding turns on the existence of consent on the part of the owner of the vehicle. The question is asked – at the time of the driving – did the person who exercised control over the vehicle do so with the consent of the owner.

Consent – when given and taken back – is a slippery concept – not as clear as the government may like at trial.  While the defenses to joyriding focus on the owner’s consent, it is often the owner of the vehicle that calls the police and insists on pressing charges and while this may be problematic from a defense perspective – it does not mean consent was not given at some point.

Not surprisingly the crime of Joyriding is most often committed by young boys..seeking the excitement and rebelliousness that derives from this overt act of defiance. While clearly illegal – it is obviously dangerous and can pose a real threat to themselves and others in the car and on the road.

The presence of one or more of these “aggravating factors” enhances the crime to Aggravated Motor Vehicle Theft in the FIRST Degree,

Importantly – under a theory of accomplice liability (LINK) – not only the driver – but ALL of the passengers in the vehicle can be charged and held responsible for paying the cost of these damages.

Therefore make no mistake – you do not have to be the driver in a joyriding offense to be charged with that crime.

The Benefit Of The Colorado Juvenile Justice System

As I have written elsewhere LINK – the Colorado juvenile justice system charges juveniles differently than adults – all crimes – with few exceptions – are charged as “delinquent acts” rather than felonies or even misdemeanors.  In most instances the punishments and conditions of probation remain the same no matter what the charge. In Colorado juvenile court – the plea bargain focuses on a number of factors, such as the nature of the offense, the age of the juvenile, the juvenile’s history, his family and social background, and more.

Joyriding is -most of the time a prank. A young man sees a car and wants to drive around in it. He  takes it with no other purpose other than to simply ride around in the car. The cars that are stolen are usually recovered within a day or two in the same area that they taken. Unfortunately many of the cars that are stolen for joyrides are damaged, because the young man or men doesn’t care what happens to the car.

Again – unfortunately – joyriding has been with us since automobiles were first invented. It often is accompanied by danger such as speeding, reckless driving, and consuming alcohol and the consequences can be deadly. On the other hand – the crime is committed mostly by immature young boys – and if the case is proven – their lack of life experience must be taken into account in their treatment in juvenile court.

If the “taking” of the vehicle is for a very short period of time and/or a very short distance is traveled, an experienced Colorado criminal defense lawyer might even argue that the “taking” was too insignificant to support a criminal case.. This is known as a “de minimus” defense.

Please call our law firm if you have questions about ..

H. Michael Steinberg has been a Colorado criminal law specialist attorney for 30 years (as of 2012). For the first 13 years of his career, he was an Arapahoe – Douglas County District Attorney Senior  prosecutor. In 1999 he formed his own law firm for the defense of Colorado criminal cases.

In addition to handling tens of thousands of cases in the criminal trial courts of Colorado, he has written hundreds of articles regarding the practice of Colorado criminal law and frequently provides legal analysis on radio and television, appearing on the Fox News Channel, CNN and Various National and Local Newspapers and Radio Stations.  Please call him at your convenience at 720-220-2277.

In the Denver metropolitan area and throughout Colorado, attorney H. Michael Steinberg provides quality legal representation to those charged in Colorado adult and juvenile criminal matters.